Arcadecon is on this weekend 3rd to the 5th of August in the Crown Plaza Hotel, beside the Blanchardstown shopping center. 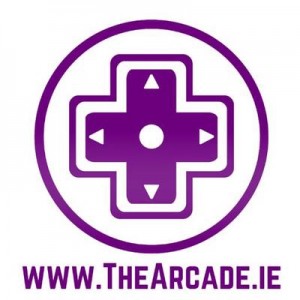 It’s one of the few conventions I’ve not yet attended and I am looking forward it for a range of reasons. Most conventions I attend are usually focused on one aspect of fandom or geek pursuits, but this looks like a real all rounder.  I am looking forward to hearing Paul Bolger talk about Cú, hopefully meeting Professor Elemental, attending the Kapow Burlesque, meeting members of the USS Cuchulain.

So much to see and do, I have images of the current time table below so people can have a look at what to expect over the weekend. As ever a time table is only every finalised after an event has finished. 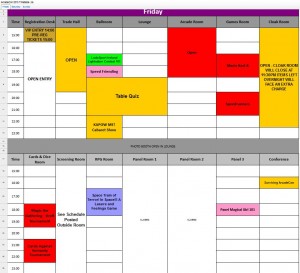 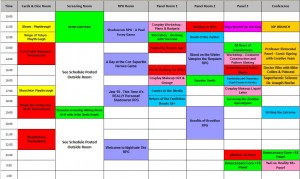 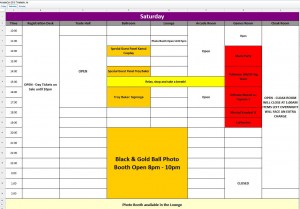 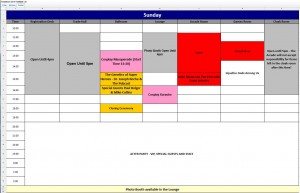 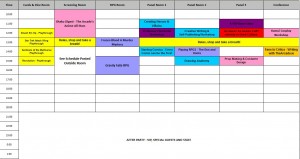 If anyone wants to talk to me about Octocon please do come find me, I may also have some Dublin2019 flyers with me.

This, this is art and sharing and why I <3 her work so much and respect her as a person as well as an artist. This had me sobbing quietly and willing myself to stay to the end and listen, rather then fleeing to cry where no one could see me. As I did, those people around me who I am blessed to call my friends, gently touched me to let me know they were there, but not in a way which would make me falter.

When she was done I fled to the ladies and sobbed my guts out for 5 mins and then went back to sing and laugh and dance. The last two weeks for me have been wonderful, I have been happy, I have been content in my own skin, no panic attacks, I have been feeling in charge of me and my life. Twice I have felt awful, that flash which reminds me that I had not been that way for a long, long time.

I was enjoying myself on Thursday with abandon, no cloud to struggle against, no dampers on me mentally, emotionally, spiritually and then this was played.

This time 25 years ago the first single of Tracy Chapman’s self entitled debut album was making it’s way up the Irish charts and getting a lot of air play on local and national radio stations. I was turning 13 and so much of my memory of back then is tied in with that single which was Fast Car.

It speaks of a young woman’s search for love and a better life then she has seen her parents create. About being so desperate to get away from her life that she takes up with the first guy who has a fast car and try to get away to only unknowingly re create a relationship similar to what her parents had.

Talkin’ ’bout a Revolution was released at the end of the 80s when Ireland and so many places around the world had been struggling with the tough economic times. It spoke of hope and of the end of oppression.

25 years later it seems not much has changed.

While they’re standing in the welfare lines
Crying at the doorsteps of those armies of salvation
Wasting time in the unemployment lines
Sitting around waiting for a promotion
Don’t you know, they’re talkin’ ’bout a revolution
It sounds like a whisper

Even more so when you listen to “Behind the Wall”
The un accompanied vocal is stark and sad, as stark and sad as the story it is telling.

And the policeman said
“I’m here to keep the peace.
Will the crowd disperse?
I think we all could use some sleep.”

This week there has been a very high profile case in the papers,
but it is one of many, too many. 25 years later there are too many men and women who are in abusive relationships, who are isolated, ignored, unsupported while too many of us turn a blind eye and a deaf ear and blame them reducing a very complex and harrowing situation to victim blaming.

Behind the wall had a profound effect on me as a young teen.
The scary thing is shortly my own daughter turns 13 and not enough has changed in the last 25 years.

We need again to start ‘Talkin’ ’bout a Revolution’,

I’m taking a break for a while, we’re are into jr cert exam crunch time and with a kid who’s on the autism spectrum, so stress levels are a bit on the high side for both of us. Hopefully once the exams themselves kick off things will settle down. Often the before is worse then the thing it’s self.

In the mean time is eyes thrown to heaven, remembering to take deep breaths and taking a time out even for 5 mins and then starting again.

I never liked the original much but this one is glorious.

I don’t get to many gigs, between the cost of some of them these days and the brats more often then not I find myself in the position of wishing I could go and it just not happening.

When I heard that the Evelyn Evelyn gig was happening, I decided I was going, it was far enough out that I could make arrangements, so the tickets were booked. Then there was a fecking natural disaster!

Boyfriend stranded in Holland, the band and crew for Evelyn Evelyn stranded also and due to having to work late
my sitter had to cancel, but Amanda Palmer made it and is doing a solo gig. My co parent has offered to take a half day from work and as it turns out there will be a fair few people I know still going to the gig and I have even manged to arrange a lift in.

Note to self: Be your own fairy godmother more often, you’re worth it.

Some days need a little bit of Tori time in them to lift the spirits and make you think.

Her music has always drawn me in but it is the lyrics and layered meanings which keep me coming back, it’s musical poetry, it’s a story, it’s conveying complex emotions. I never got ‘pop’ music which didn’t do that growing up, I wasn’t a brosette or or a boy band fan.
Music which has meaning and makes you think was and still is what I like and many of the
bands I listened to while my peers were drooling over the twins and the other one,
like the sugar cubes, the cure, the smiths, the stunning I still dip in and out of.

Tori came a bit later and it was not under the pink which really hooked me but boys for pélé with it’s richness of sounds and range of instruments.

Some of the tracks were recorded here in a church in Delgany.