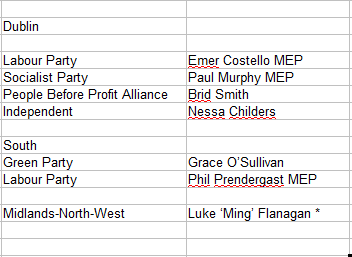 Even with all the candidates which are running in the 3 regions very few of them are openingly prochoice.

* how ever it seems that the person whom Luke ‘Ming’ Flanagan has nominated to take his seat if he can not fill the one in the EU parliament is pro life.

But the garda whistleblower, John Wilson, is happy to chat. Wilson, who underwent bowel cancer surgery in March, had intended to run as a Mingist independent candidate here (there is an actual inky Ming stamp of approval, bestowed on 15 approved local election candidates) but has just withdrawn for health reasons. He remains Ming’s “deeply proud and honoured” first sub for Europe.

“I’m pro-life and anti-drugs – I’d ban tobacco if I could”, says Wilson, “but he still chose me. He’s just a really genuine, decent individual . . .”

3 thoughts on “Updated @ 11am:Voting Prochoice in the EU elections.”