When I wrote about the 100th anniversary of International Womens’ Day 5 years ago, there was very little about it anywhere. There certainly wasn’t a Google Doodle, there weren’t images being shared on Facebook and Twitter.

We now have more women in the Dáil then ever, the silence around reproductive rights is being broken, the women esp young women are not hesitant to call themselves feminists.Women are sharing about the stuff they put up with, which we shouldn’t have too.

But we have far to go, to #repealthe8th and undo the years of cultural sexism in our society. This was written the year I was born, 40 years ago and much of this work still needs to be done. 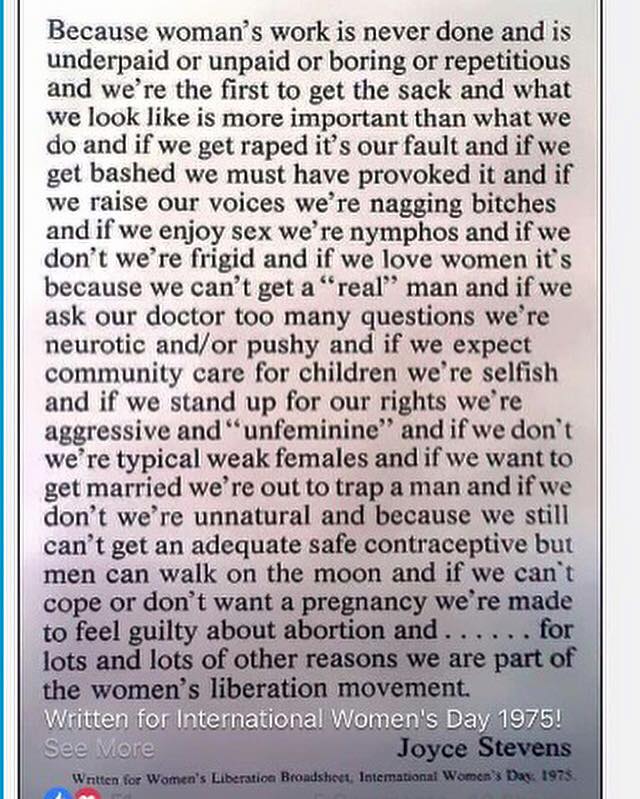 I hope to live for at least another 40 and now more then ever I am optimistic that we will see the changes, we all need for a better, fairer, kinder society.

As we come marching, marching in the beauty of the day,
A million darkened kitchens, a thousand mill lofts gray,
Are touched with all the radiance that a sudden sun discloses,
For the people hear us singing: “Bread and roses! Bread and roses!”

As we come marching, marching, we battle too for men,
For they are women’s children, and we mother them again.
Our lives shall not be sweated from birth until life closes;
Hearts starve as well as bodies; give us bread, but give us roses!

As we come marching, marching, unnumbered women dead
Go crying through our singing their ancient cry for bread.
Small art and love and beauty their drudging spirits knew.
Yes, it is bread we fight for — but we fight for roses, too!

By James Oppenheim inspired by Rose Schneiderman who coined the phrase
“The worker must have bread, but she must have roses, too.”

Today is internationals women’s day and I’d like the address the issue of how we have abandoned the term woman.

I am not a girl, a girl is an immature woman.
I haven’t been a girl for years and I honestly don’t think that the term applies any more once you hit 20. Honestly you are an adult once you hit 18 and can vote but I would say fair enough if you are 20/21 and want to use the term girl, but after that 20 to about 25 I would say you are a woman, a young woman but a woman.

When we reject the term women we are buying into the bullshit that women are not fun, desirable, valued, powerful. Just because we go from being girls to being women that does not mean we suddenly become harridans. The idea that women have more responsibilities and are restricted and tied down has many young women rejecting the term over the years. Honestly, fuck that time to take it back.

This was written the year I was born.

(Helen Reddy and Ray Burton)
I am woman, hear me roar
In numbers too big to ignore
And I know too much to go back an’ pretend
‘Cause I’ve heard it all before
And I’ve been down there on the floor
No one’s ever gonna keep me down again

Oh yes, I am wise
But it’s wisdom born of pain
Yes, I’ve paid the price
But look how much I gained
If I have to
I can do anything
I am strong (strong)
I am invincible (invincible)
I am woman

I am woman watch me grow
See me standing toe to toe
As I spread my lovin’ arms across the land
But I’m still an embryo
With a long, long way to go
Until I make my brother understand

Oh, I am woman
I am invincible
I am strong

It’s international women’s day so I went out to lunch with the woman who has inspired me the most, my Mam.

She had 5 kids and in the 80s when my Dad was not working she went out to work and he became the stay at home Dad. When having a gang of kids and a husband with so many illnesses he was eventually given a disability classification, she found she wasn’t coping she went and sought out counseling and took on parenting classes and certified to give to classes to other parents who were struggling.

We have had some spectacular falling out over the years, she’s not always agreed with my choices but she always loved me and tried to be there for me, to encourage and support me.

I am very grateful that we are at the stage in our relationship that we talk together as women and no longer just mother and daughter. So I rang her up this morning and we went for lunch to celebrate international women’s day and to talk about life and the world entire.

Some of her words of wisdom.

“Ireland is a young country, we are not 100 years old yet as a nation and a society, we are growing and hopefully soon we will reach the sort of maturity that brings with it acceptance.

Acceptance of the choices grown adults make about their lives and with that making sure they all have the same rights and access to what ever serves they need. And why shouldn’t gay people get married, it’s about love, why shouldn’t they have a blessing and a ring and a cert just like everyone else?

That this acceptance will hopefully throw away the restrictions due to gender, people can do so many things, people need to be given the opportunities to do those things, to develop their talents and never be told they can’t because they are a man or a woman.

Hands have no gender and working together we can make the world better for the generations to come, but it has to start at looking at and naming inequality. Women have to work harder then men to prove themselves and that is not fair and it holds women back. It is moving forward, there is change but we have to make sure we work to make it happen.

And to change society it’s not about talking to people ‘in power’ it is about conversations with people, everyday people, talking about why things are the way they are and how they could be different I have seen a lot of change in my life time and I hope to see a lot more.”

She likes to say I am more like my Dad then her but honestly some things I certainly got from her, I didn’t lick it off a stone!

Why write this today and not on Mother’s day, cos this is about the woman I know who happens to be my mother, a woman I respect and admire who is my friend and more then just my Mammy.

Did you know that today is International Women’s Day?

Did you know that it’s a 100 years from the first one?

In 1910 the first international women’s conference was held in Copenhagen (in the labour-movement building located at Jagtvej 69, which until recently housed Ungdomshuset) by the Second International and an ‘International Women’s Day’ was established, which was submitted by the important German Socialist Clara Zetkin, although no date was specified.[1] The following year, 1911, IWD was marked by over a million people in Austria, Denmark, Germany and Switzerland, on March 19.[2]

However, soon thereafter, on March 25, the Triangle Shirtwaist Factory fire in New York City killed over 140 garment workers. A lack of safety measures was blamed for the high death toll. Furthermore, on the eve of World War I, women across Europe held peace rallies on 8 March 1913. In the West, International Women’s Day was commemorated during the 1910s and 1920s, but dwindled. It was revived by the rise of feminism in the 1960s.

Demonstrations marking International Women’s Day in Russia proved to be the first stage of the Russian Revolution of 1917.

Following the October Revolution, the Bolshevik feminist Alexandra Kollontai persuaded Lenin to make it an official holiday in the Soviet Union, and it was established, but was a working day until 1965. On May 8, 1965 by the decree of the USSR Presidium of the Supreme Soviet International Women’s Day was declared as a non working day in the USSR “in commemoration of the outstanding merits of Soviet women in communistic construction, in the defense of their Fatherland during the Great Patriotic War, in their heroism and selflessness at the front and in the rear, and also marking the great contribution of women to strengthening friendship between peoples, and the struggle for peace. But still, women’s day must be celebrated as are other holidays.”

How is Women’s Day Celebrated?

On this day it is customary for men to give the women in their lives – mothers, wives, girlfriends, daughters, colleagues, etc – flowers and small gifts. In some countries (such as Romania) it is also observed as an equivalent of Mother’s Day, where children also give small presents to their mothers and grandmothers.

After the collapse of the Soviet Union celebrations of IWD were abandoned in Armenia. Instead April 7 was introduced as state holiday of ‘Beauty and Motherhood.’ The new holiday immediately got popular among Armenians, as it commemorates one of the main holidays of Armenian Church, Annunciation. However, people still kept celebrating IWD on March 8 as well. Public discussion held on the topic of two ‘Women’s Days’ in Armenia resulted in the recognition of the so called ‘Women’s Month’ which is the period between March 8 and April 7.

In Italy, to celebrate the day, men give yellow mimosas to women.[19][20] Yellow mimosas and chocolate are also one of the most common March 8 presents in Russia and Albania.

The 2005 Congress (conference) of the British Trades Union Congress overwhelmingly approved a resolution calling for IWD to be designated a public holiday in the United Kingdom.

This year the theme is equality.
[YOUTUBE=http://www.youtube.com/watch?v=ye8iGQ1d9Cg]

There are 47 events happening in Ireland to mark the day.
http://www.internationalwomensday.com/search.asp?country=102